I had a pretty creepy dream last night, one which involved a lot of massively over sized spiders crawling all over the place and leaping on people and sticking their fangs into the people’s faces and… yeah all kind of affection. Why must my brain decide that spiders are better dream material than white fluffy bunny rabbits, or even the flying dream! I haven’t had the flying dream in a while, though I have had dreams recently where I can move things with my mind… perhaps some subliminal advertising from the makers of Chronicle.

Anyhow, with my creepy dream about large hairy spiders, *shiver* it took me completely by surprise to see a large, furry black thing clinging to the curtain in my bedroom when I woke up. It was ball-shaped and had two leg-like objects sticking out of it, I couldn’t identify it at all. I instantly assumed for the worst, expecting it to be a massive hairy spider-like the ones in my dreams, because I have in the past had a dream that my room had multiple huntsmen crawling all over the walls only to wake up and find that I DID IN FACT have multiple huntsmen climbing all over the walls. I can tell you, that was an incredibly… interesting… moment…

So there I was, sitting still in my bed staring up at this unidentified creature, my theory that it ‘must be a spider curled up into a ball’, wasn’t actually convincing me that much, because it certainly didn’t look like a spider, unless spiders had now figured out how to create their own sleeping bags. I called out to my father, who walked into the room, pausing for a moment, then saying, “What the French mustard is that?!”

Could it be some form of alien life?

No. After examining it further dad had it figured. “It’s a bat!” He said, and in reply to mum’s question, “Yes a bat, look.”

It was a baby bat, chilling in my bedroom. = O 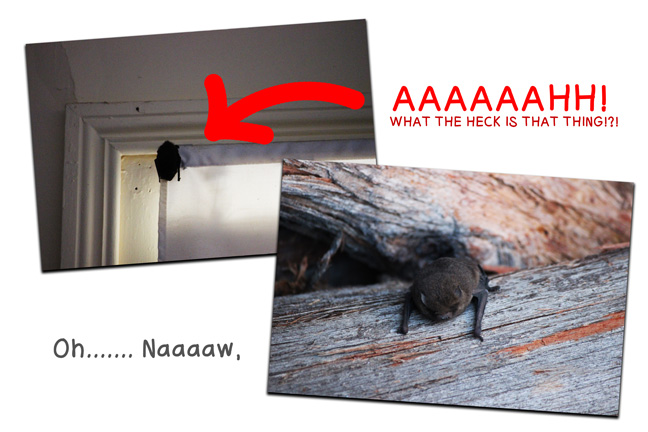 In the end dad grabbed an old Pringle’s cylinder, a piece of cardboard, and carefully removed him from the curtain. It’s a well-known fact that bats carry a whole array of diseases, and this bat was definitely looking worse for wear. Whether that’s to do with him actually being sick or the fact he was awoken from his slumber by a man trying to force him into a cardboard cylinder I’m not sure. Probably a bit of both.

Anyways, dad brought him outside and placed him in the shade of our wood stack, bats actually are said to live in the hollows of trees, so we figured he’d be able to get the rest of his interrupted beauty sleep here. Later in the day I went to check up on him (or her) and it was gone. Who knows where the bat goes?

There was much debate about how he somehow managed to get inside without us noticing, and then entered my room at some point during the night.

All I can say is that next time I see a large black thing clung to my curtain, I’ll probably say, “Oh, another cute little bat,” then I’ll realise as it leaps onto my face with its hairy legs that I was wrong and it was in fact a massive hairy spider with a sleeping bag…

*Shudders*
That is really creepy! I would have ran out of my room if I saw those huntsmen… oh, the bat was interesting though 😛