Skip to content
Download the GEX posters from the Super-D comics!
These include 2 different sizes in zipped (compressed) folders. 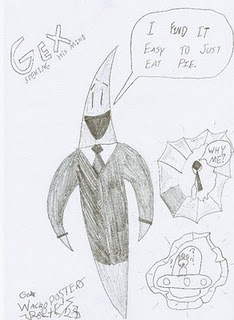 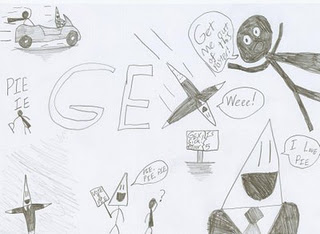 Download Details:
Size:2MB
File Type: .Zip (compressed) folderDOWNLOAD GEX SPREAD POSTER
____________________________________________________
There are new Super-D posters avaliable to download!
Click here to go to the Benaball Downloads page to have a look!
Gex’s gift is more than he expected!
Before flying off traveling to meet a top specialist on ‘being hunted’
he runs into a devious dude that seems to like bombs so much,
He’s given them to everyone . . .
There is a bank robbery and Super-D flips, he’s sick of the author sticking bank robberies in all the comics. So he let Gex save the day this time. Or will it become more than this time?
Join Gex as he stops the bank robbers with his newly found powers. 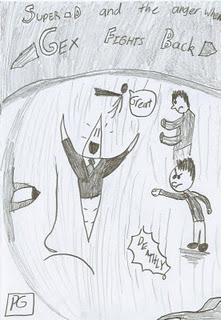 I never thought it would happen.

I figured that after the Idle Of Fire had been destroyed that the world would be back to normal, that the sun would shine, that the harsh hurricanes and coarse winds would vanish and of course that the freezing ice would melt.

I am Ben, the leader of Ben-A-Ball.

And I am lying on the grass, remembering where I was.

‘I recall being outside a warehouse,’ I thought, ‘and it was full of Cydroid parts.’

Partly trying to get up off the ground and partly thinking I continued.

I stared at the sky, Black.

I stared around me, Black.

Only when the darkness was moving around did I realise what it was.

Creatures, black cloth-like creatures, floating in the air like oil on water.

Knowing the situation was difficult.

I had forgotten where and when I was.

But I now remember. Memories start flooding back.

I remember the Idle Of Fire that Ash and I had opened.

There was like a flame inside burning away. Then the next thing I know the Idle Of Fire flies out of our icy cold hands and stabs itself into the ground.

A huge rift appeared in the ground, and dinosaurs started coming out.

But these creatures around me aren’t dinosaurs, no way, they are like a piece of see-through black cloth. Like floating black water.

Of course! Ash and I rounded them up and then somehow moved the rift to the darkest of space.

I hear a voice; “Ben!” called the voice.

I gathered that it was Ash, “What are these things!”

I attempted to kick one of the swirling creatures.

Feeling my belt I found a hard shaped device. I didn’t know what it was but I hoped it would help. I pressed a button and the darkness faded. A blinding light flashed. I could see that I was holding a flare. I could also see the dark creatures slowly floating away. The swirling darkness stopped and slowly moved back.

We sped out from under the darkness and ran. The creatures moved out of the way as we ran . . .that is . . . until the flare ran out.

The dark creatures moved forward as smoothly as the tide lapping the shore.

Go to Ben A Ball HQ to read more.