The Talking Dog gets into more strife.
His human emotions stolen by a smart learning robot,
Can he get them back?
And Duncan Ball goes to Bogusville and lives in Selby’s house.
What could happen if Duncan Ball found out about him!
Selby has to keep his secret double time. Happy Reading!
Benaball,
Ben's Childhood Blogging
,
Review
Selby Surfs
By Duncan Ball
The only talking dog in Australia and possibly the world goes on more adventures.
Selby is stuck to a super fast surf board.
But that’s not all he is also stuck on the board with a dare devil surf racing champion.
Also Selby fills in a form to see your pets IQ.
But when someone finds this form what chaos could occur?

Happy Reading,
Benaball,
Ben's Childhood Blogging
,
Review
Schooling Around- Treasure Fever!
By Andy Griffiths
Henry McThrottle is a student at Northwest Southeast Central School,
and Mrs. Chalkboard is the teacher of grade 5C.
But when she doesn’t arrive in the morning the class is worried.
They have a relief teacher come in, but he is like no other.
Instead of teaching ordinary lets just say he’s a tad off . . .
His name is Mr. Brainfright.
Mr. Brainfright’s first lesson with the class isn’t quite what they’d expect.
Also when Henry finds that their is treasure in the school it’s digging time that sends the school into Treasure Fever!
Mr. Brainfright says:
When you’re breathing it’s very important not to fall out the window. 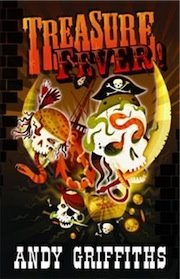 Selby goes in more adventures.
In one adventure Selby’s other side splits out of the mirror in
Dr. Trifles work shed.
But Selby’s reflection has a different attitude to keeping a Secret.
Could Selby stop him before he gives it away?
Also Selby encounters a really venomous spider could he be in danger?
Along with that, Selby struggles to make his way
in an ancient tomb.
Could he survive the Night of the Dancing Dead? Happy Reading!
Benaball,
Ben's Childhood Blogging
,
Review
The New Ben A Ball Author Is Ready!
Ben A Ball Author is where you can read about books and what’s in them.
Comment on books and let others know what you think.
And send in you own stories to be published on the site! To go to this new section of Benaball.blogspot.com
Click Ben A Ball Author link in the side bar or click here!
Enjoy!
Benaball,
Ben's Childhood Blogging
,
Review