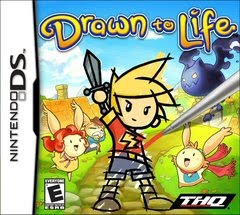 Drawn to life is a game for the DS (Duh) it is also on the Wii, in this game it starts in a dark snow-covered town and your called the creator you create practically everything first you start, woe! I was about to spoil the beginning, the people, houses,trees, ground, enemies, dark clouds, backgrounds and levels have been done already, what I like about the game is that you get to draw the hero, you’re not stuck with one guy for the whole game unlike a lot of other games, you can have three heroes on one user so you could have a robot, an alien and a human! Note: alien templates can only be unlocked by a code when in draw mode, hold L and press the following if you want alien templates:x,y,b,a,a.