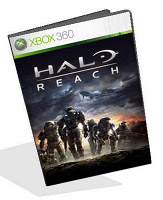 
About:
Halo Reach is the final Halo game to be made by Bungie, and the final chapter in the series, Halo Reach, Halo: Combat Evolved, Halo 2, Halo 3: ODST and Halo 3 in that order of storyline.
You play as Noble Six, a Spartan with a mysterious past, and the same ‘no taking off the mask for the player to see’ policy.
The story takes place on Planet Reach, a human colony and military outpost, the Covenant are invading Reach trying to find the location of our home world, Earth, in the end there’s a lot of deaths, and planet Reach, is lost.

Review:
Many people have said that it’s the best Halo game released, I have to say I agree, the graphics are simply amazing eye candy, the forge is amazing with the degree of creation possible, and the campaign and multi-player really do the game good.
The campaign isn’t some cheap short campaign, this campaign actually goes for considerable time, unlike other games in which it ends practically when you started playing.
Forge is Bungie’s way of allowing gamers to create their own maps and masterpieces, and the user-created maps I’ve seen are stunning. One thing that does annoy me though, is just like Halo 3, and Halo 3: ODST you can’t play the campaign, in co-operative with 4 player split-screen, its limited to 2 person, yeah it can get cramped on the screen, but come on.

Summary:
Great graphics, some awesome secrets that you can find, and the new abilities make online a lot more fun, all those people who say it ruined it are just idiots that can’t get the gist of using the new features, it makes the online experience heaps more fun.
Campaign did let us down a little bit here and there, I noticed the Spartans that were helping me did some stupid things, like when I got in the turret of a Warthog, the Spartan wouldn’t drive, she just sat there, and one time I fell off the cliff with her in the passenger seat, and she didn’t die, she climbed out of the burning warthog at the bottom of the cliff and said “Six is dead” . . . along with them occasionally using the armour-lock-up ability when there’s nothing happening. The online is the most fun I’ve had with a Halo game, and the new armour and better ranking system keeps you keen to keep on playing, although I was annoyed that Offline players got points faster than those that have played or are playing online.


P.S. Did anyone notice that the Jackals are holding their shields in the opposite hands? In every other Halo game they’ve held it in a different hand. I didn’t even notice.