Hello, how are you going.

The last thing that I should be thinking about during the school holidays is, well, school. But it just so happens that I’ve been eager to talk to you about the stuff we’ve been learning during math class (no, I’m not losing my mind.) The main reason for my sudden story-telling urge, is that my math class is in fact being taught by . . . wait for it . . . by the Master Of The Universe.

You heard me correctly! The Master Of The Universe is teaching my math class! Isn’t that exciting? In fact so exciting that I’ve just ended 3 sentences on one line just by using exclamation marks and a question thingy-ma-bob. Anyways, when I say the Master of The Universe I’m simply going by what he said, I don’t know if he can actually bend time, mold black holes into the shape of Kyle Sandilands’s career (which isn’t that hard) or even compact the swirling storms of Jupiter into the space the size of a 5 cent coin just by winking.

I honestly don’t know, but he said that he’s the Master Of The Universe, and he’s a teacher, so he must be telling the truth. (Just in case your thick . . . I’m joking, I don’t seriously believe that he’s the Master Of The Universe, that role is already taken by me. (Just in case you’re really, really thick, that was a joke too.(Gee, look at me using brackets like a programmer…))) What I want to talk about though, is what we’re learning, trigonometry.

In trigonometry you have a hypotenuse, the longest side, an opposite, the side opposite theta, an adjacent, the side below/next to theta and then you have theta.

Theta is a Greek numeral, but it’s used in trigonometry a bit like a pronumeral, it’s essentially an unknown value. It is the number of degrees in that corner of the triangle, in this case theta is 40 degrees.

Opposite isn’t a Greek numeral, it’s simply a value opposite of the theta sign, you’ll need to know where the opposite, hypotenuse and adjacent is when figuring out trigonometry questions.

Adjacent is the value below the theta sign. Remember if you are working with a triangle which has been rotated, then you’re adjacent might not be below theta.

Anyways! The one I wanted to mention here was the hypotenuse it’s the longest side of a right-angled triangle. But why am I talking about the hypotenuse? Well, it just so happens that I misread it a few times, and referred to it as hypo-tennis-shoe which is exactly what it looks like when you read it quickly, well, not really . . . but it sounds like it if you read it ten times reeeeallly fast. 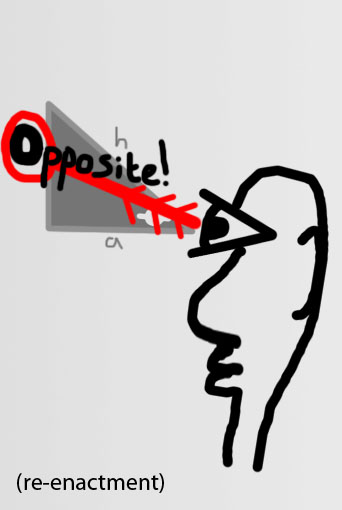 Anyways! Back to the Master Of The Universe!

Our math teacher, a relief teacher who I won’t name the name of because he goes by the title “The Master Of The Universe”, has an interesting way of teaching. He’s always drawing these really weird pictures to explain things, along with using weird analogies such as sunbathing and nighttime-snooping to describe tangent and adjacent.

It’s rather exciting to say the least, each math lesson TMOTU (You know what it stands for . . .  I’m getting sick of typing it) comes up with so many weird and wacky stories, that Paul Jennings or Steven Moffat would go into shock, throwing their careers out the drain because they simply can’t compete with the mind that is TMOTU.

To the right you can see a ‘re-enactment’ of one of the wacky pictures TMOTU drew, as you can see, to find the opposite you have to imagine a man standing at the tip of the triangle where theta is and looking right through to the other side. The opposite.

I tried to re-draw his masterpiece as best as I could, but my drawing skills are no match for the Master Of The Universe…..

Imagine I came into your house at night and shone a flashlight from above directly down into your face, and you screamed out ‘aaaaaah!'”

– The Master Of The Universe describing the adjacent side in correspondence to the theta symbol.

Now I don’t intend to bag anyone out at all, I think that even though his methods seem rather strange and bizarre, they actually work really well. Because us, being the kids we are, take the funny gobbly-goop that he says and pass it on, which is essentially teaching heaps more people, take a look at all the stuff I said about trigonometry above . . . It’s proof that even though he comes across as weird, I think that he’s actually doing it on purpose. A deceptive plan for educating the youth, he’s the Master Of The Universe after all, he knows these things.

Well, I’ll be seeing you later, I’ve got some pretty interesting posts to do during the rest of the holidays, so stay connected.