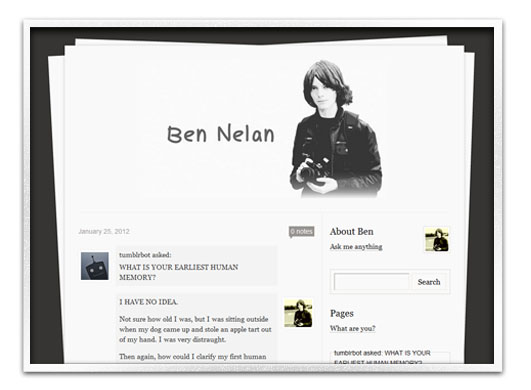 Awhile ago a friend of mine told me that I should get a Tumblr account. (If you’ve read my Tumblr post, this post will sound pretty familiar for a little while)

Call it boredom, but I have finally followed up on that suggestion, behold, I have a Tumblr account. Really not seeing why I even decided to create this account, due to the fact I already have a website where I write mind-boring blog posts about myself questioning, then re questioning myself… it’s all quite mental really, and now that I have a Tumblr (Drinking game, take a shot every time I say “Tumblr” =P) account I’ve basically just spread my insanity across two platforms. Three if you include my first blogging experience with Blogger.

[That’s part of the first post on my Tumblr account, I couldn’t be stuffed writing an explanation again.]

My Tumblr webpage obviously, is solely me, none of my brilliant benaball.com authors will be contributing their witty creative posts to it. The sad thing about this webpage is that it will probably run faster than my main website, because it has the backing of Tumblr’s many servers (If you don’t get tech stuff don’t even bother asking me to explain…), another sad thing is that it looks really nice and the final sad thing is that it’s far easier to post to Tumblr from my mobile devices and to write posts, than it is on my main website…

I’ve decided that Benaball will be for my bigger posts, VidLogs all the stuff I’ve already been using it for, and my Tumblr will be for little thoughts, snippets, quick photos and things like that. Chances are when school kicks back in I’ll end up abandoning both Tumblr and Benaball like I have in the past, meaning there won’t be any real frequency in posting…

Deary me, why did I bother typing tonight, I’m obviously not in the mood, I just feel so unstructured with my writing at the moment.

When I was trying to write a clever quote on my new Tumblr page to show off my obviously super-natural intelligence, (…super-natural conceitedness) I ended up practically writing a post. I started a quote saying, “Imagination has no limits,[…]” then I foolishly added, “[…] or does it?” Gawd, why did you write that Ben? Surely I am aware that by writing that I would be sent into the paradox of my own questioning mentality.

I soon backspace’d my entire quote because it’d obviously grown far too large to be a quote, and decided to tell you here what I started mind bubbling about.

“Imagination has no limits, or does it?”

Does  imagination really have no limits? We say that with our imagination we can think of anything, picture anything, even sequence out in our minds how to kill, amputate and dismember the body parts of our enemies. It’s so ‘limitless’ that we feel as though we can say it’s unbound, it’s as large as space itself.

But what if our imagination is in fact limited? What if by instinct we can’t actually think of some things, but because we can’t think about it, we don’t know that it’s not there, and as I’ve said before, If we grow up with something being in our lives, we’ll see it as normal. (Imagine if you grew up and your eyes saw the colour blue as red, and the colour red as blue. You wouldn’t pick up on it at all, it would be completely normal to you because you grew up with it like that.) Could it be that out there somewhere in the universe there is a being that can imagine beyond what we can, perhaps their mind could be more advanced than ours… But we cannot imagine what things they’d be capable of imagining because, we’re not capable of imagining it! Call me mental and send me to the nearest ward, but it’s things like this that can make you incredibly confused. What are you’re thoughts on this?

Do you think that the imagination does in fact have its limits? I think it’s interesting that most the things we imagine aren’t truly original, they are often a modified version of something else we’ve already seen.

Boredom is probably the reason why I got a Tumblr account… although, I do have a lot to do. I have things to do, yet I’m putting them off, meaning that I’m bored until I eventually do them. I really am bored writing about boredom, and I’ve only written a line and a half… Gah, I’ll finish this post here.

Thanks for reading as always people.

I took the time to read this post. I found “the post” section quite intriguing, but ABANDONING Benaball? What is this? >:(
Looks like this “Tumblr” is soon to get a new user…

I’ll still write posts on Ben-A-Ball like I normally do. =) Tumblr is extras and snippets.