I have to say, Doctor Who is a relatively odd experience for me these days.  There have been many episodes in the Matt Smith episode that have just left me completely disappointed and dislocated from the absorbing storyline of  the Time Lord and his many companions.  To me it has been quite unnerving, because many of the plots have just been ludicrous to the point that I don’t want to ‘take them seriously’ – in other words, I cherry-pick my favourite episodes and try to forget all the below average episodes that don’t fit my vision of Doctor Who. Woah, reading that back to myself… Doctor Who IS a Religion!

But behold, the one episode of Doctor Who in Matt Smith’s era that I actually don’t mind.  Keep note here,  I didn’t say I love it – but it is most definitely an improvement.  That episode is ‘Journey to the Centre of the TARDIS’ – and let me tell you what really made this episode for me. THIS POST CONTAINS SPOILERS. 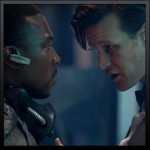 “It’s no secret that Matt Smith hasn’t played a very serious Doctor in his time on the show.  His incarnation of the Doctor often seems more confused and silly than serious and insightful – I’m not saying that the role of the Doctor shouldn’t be humorous – but there’s a balance needed to persuade the thought that there is over 900 years of Time Lord in that head.  Even Tom Baker, who was without a doubt one of the more silly Doctors, had his balance of seriousness and wisdom.

When the Doctor set the timer and locked the scavengers in the TARDIS – telling them that if Clara wasn’t found within the hour the Time Machine would explode killing them all – I, for the first time in ages of watching Doctor Who, laughed in excitement.  That was the Doctor that I’ve always wanted Matt Smith’s Doctor to be.  But it gets better. For me, the greatest moment in this episode… and I could probably go as far as to say the whole Matt Smith era leading up until now… was the bluff.  Later on in the episode, the Doctor reveals that he was bluffing – saying that you just have to ‘Wiggle a few buttons’ – but most importantly, give them ‘the face’ and say, “Save her, or we all die.”  Absolutely freaking brilliant and so very, very Doctor Who.  It sends shivers down my spine just thinking of the perfect execution of that scene. (They slightly diminished the moment when the dialogue suddenly devolved into ‘We’re in trouble Clara, proper trouble. It needs fixing or we’re toast.’ Nonetheless, that moment is fantastic all the same.

“I just wiggled a few buttons, yeah, the old wiggly-button trick – and the face, you’ve GOT to do the face.  Save her, or we all die. I thought I rushed it a bit but..” – Best Line, Evvver! 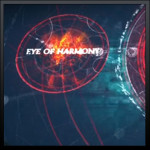 The references in this episode were pretty abundant.  I smiled when I saw the ‘Eye Of Harmony’ on the screen of the TARDIS console, memories of the Gallifreyan power-source, and the Doctor Who Movie from 1996. To be perfectly honest though – I really wish that it had been the only reference to the Eye of Harmony in the episode.  I’d much have preferred if it were left out of the plot – and just remained an Easter Egg.  Just like the ‘Smiths’ key, the various Gallifreyan audio encyclopedias, the toy TARDIS from Amy.  They even showed us the TARDIS’s swimming pool that we’ve heard so much about but never seen… at any point… ever.

I don’t think that a lot of the rooms that Clara bumped into really seemed to fit into the TARDIS… nor did it make sense that she was stopping and taking the time to look at these rooms and smiling while there was a monster chasing her…  These references seemed a bit out-of-place, or unnaturally squished into the episode. 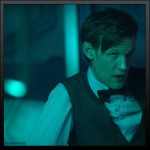 Often in Doctor Who there have been times where I felt that the reaction of the characters in the show don’t always seem very expected.  I have to say I was quite pleasantly surprised to find that when the TARDIS went dark the Doctor acted accordingly.  He wasn’t exaggerated and panicky, scared – he was serious and concerned.  I’m probably just pulling this out of the air. =) 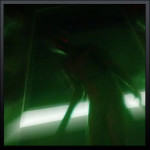 During the episode, everyone, particularly Clara, is being chased by these horrid mutant monstrosities. Later we find out that these monsters are in fact the Doctor, Clara and the scavengers from the future – who have been cooked and boiled alive by being exposed to the Eye of Harmony for too long. Considering the fact that exposure to the static pre-black hole is pretty ruddy damaging to… living in comfort… it really makes me wonder why the flip the Doctor decided that it’d be the best time to STOP and EXPLAIN his clever Gallifreyan technology to everyone… WHILE THEY’RE STANDING IN FRONT OF IT. Wouldn’t it have been better to give your tour-guide speech AFTER you’d gotten to safety and were no longer in threat of  being char-grill-zombified!? Come on!

Also – if you’re cooked, roasted and liquified I would have thought that you’d be in some pretty serious pain.  I would have also thought that walking around and hunting down yourself in the past would have seemed like a pretty ruddy weird thing to do.  Not to mention… your muscles and bones are… out-of-order… which I assume would make mobility quite difficult in the first place.

Why did the Doctor and Clara NOT turn into monsters even though they were exposed to the Eye for the same amount of time as the scavengers – and why on Earth is the transformation so instantaneous?

LASTLY,  the Doctor… is a Time Lord… We’ve all established this.  Now correct me if I’m wrong.  But if a Time Lord’s body is brutally injured or damaged beyond healing… there’s a certain little trick they’ve got called ‘Regeneration’ – I would have really thought that liquified cells, burning skin and strange glowing-eyes would be classified as pretty significant bodily damage.  Oh well, perhaps there’s a point where a Time Lord’s body can be too far damaged for the cycle to work.

2. The Name of The Doctor

Quite an interesting inclusion was the ‘History of the Great Time War’ book – then again the fact that Clara learns the real name of the Doctor… only to forget it when time is rewritten (more on that later) seemed a bit pointless, (I guess you could claim the whole episode pointless considering it technically never happened. Hmm.)

It was cool to see – but poorly implemented.  Clara walks up and instantly flips to the exact page where the Doctor is mentioned by his Gallifreyan name?  How does she even know that its him that book is referring to?  I. Don’t. Know.  Seemed like it was more of a reference to the season finale more than anything. 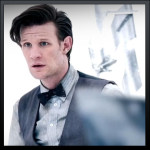 What? The engine of the TARDIS explodes – the TARDIS decides to freeze it in time and prevent it from causing any problems.

Just curious, it seemed like a very odd place for an engine.  A white vast empty space… and it… exploded upon ‘impact’ with the scavenging ship?  Lovely durable Gallifreyan technology right there, I’m surprised the black hole being held in stasis didn’t suddenly break free of its captivity and start swallowing everything up.  But never fear, you can fix all damaged done to the TARDIS by just jumping back in time…inside the time machine… and reclaim your time machine from before it broke. It’s all very strange. 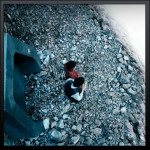 Why is there a large cliff inside the TARDIS?  I guess it’s a similar scenario to what we saw in Tom Baker’s era, where he was walking around corridors of the TARDIS which were quite obviously the hallways of an abandoned hospital.  Yes it added more variety to the episode – and the Doctor described it as ‘snarling’ at them to scare them away because it was vulnerable.  Well it seems more than just ruddy vulnerable if the engine has exploded…  Seems like it’s ‘in proper trouble.’

The writer, Steve Thompson, who also brought us the rather… ordinary… ‘Curse of the Black Spot’ episode, has done really well here.  By far my favourite Matt Smith episode – however I feel that the ending was very rushed, and because of this you come away after watching it pretty unfulfilled.  The feeling of fulfillment has been pretty rare with Doctor Who in recent times – but this episode was so close to being perfect! For what I got from this was 40 minutes of pretty decent, genuine, fan-boy Easter egg filled adventure… that was all swept under the rug and destroyed because the Doctor stopped it from ever happening in the first place.  The conversation the Doctor had with Clara about who she was? Never happened.  Clara’s journey through the TARDIS and finally getting to know her? Never happened.  ‘The Big Friendly Button?’ Whaaat?

Journey to the Centre of the TARDIS had some really great elements – but I just come away from it wanting more.  The ending was too quick and contributed nothing to the long-term storyline of the Doctor and Clara because they won’t remember any of it.  The zombified monsters that are really themselves… which means they’re attacking themselves for some strange reason… some family dilemmas between some of the scavengers – which you kind of suspect at the start of the episode anyway.

Certainly my favourite episode in this era so far – lets see though if Neil Gaiman can win me over with his ‘Nightmare in Silver’ episode.  Have to say, I’m quite worried about the episode entitled: “The Name of the Doctor” – but I doubt that Moffat would reveal the name of the Time Lord… I hope…

Well there, long post – probably ambiguous in nature and filled with contradiction… nonetheless.