Holy cow, am actually on the internet after waiting for several months… (I’ll explain later)

Now usually on this blog I leave out as much as I can about my school life, it’s the same for social networks – I’ve never said what year of education I’m currently ‘enduring.’  I feel though that for this post to have any meaning I need to break my rules.  To a degree.

This is my first year of College, and I have to say, I’m pretty lost in the amount of freedom that’s available compared to that of High School.  What I do know is this free time will allow me to write things up, like blog posts, scripts for my YouTube videos – and when I get a decent laptop to use… *sigh* … perhaps even some of my graphic work and video editing.  The positive thing about doing this at College is that it feels like an atmosphere that is far more encouraging of productivity than I have found my room at home to be.  Perhaps it’s my own mental stigma that I’ve associated ‘home’ with ‘relax.’  Though just reading back a bit on what I’ve written now, it appears that even though getting myself to work at home is a much harder task… the quality of the work is greater. Let me know if you think that’s a load of old beef, and that I’m just using odd metaphors to try to stick up for my own placebo.

I know, it’s been 246 words so far and not a single mention of this mysterious currency disappearance.  Considering the title I really just reeled you, the reader, in, and then left you hanging on the line.  So with all this free time, today I have a three-hour break mixed in with my other lessons, I decided that I would go by some more stationary, go grab a burger that is greedily taken advantage of by my teenage metabolism – and then go to the library where I would borrow a computer, write-up a blog post and then plan up an Uploadthedownload video to film and edit this afternoon.  My plans didn’t go… according to plan.

Went to get some more pens, it was going to cost me $11 for 3 packs of my favourite variety, (the kind I use every night to write in my journal) – In my mind, at that stage, my wallet had about $25 plus gold coins in it.  I took a look around further, considering buying a folder to keep all my maths books and equipment in… thankfully I saved myself… by deciding to put it down.
Went to the checkout, handed the items over to the lady… opened the wallet and blam, nothing but a measly $5 note, and $2 in coins… well, I guess I could have handed them my student card and said, ‘Is this acceptable currency?’

I asked if I could leave one of the packets of pens behind, and just purchased the others for $6.95 – but now I definitely didn’t have enough for that burger. Yeah, yeah – could have just forgotten about the pens and bought the burger.  But where’s the fun in that?  Now I get to test my strength and survive the rest of the day with only the small amount of food packed with the anticipation of a major meal later in the day.

I did have a $20 note, I remember fondling it as I came up with my ‘brilliant idea’ – and I most definitely didn’t spend it on anything else. Hmmm, could there be a robbery case going on?  I have heard that some Year 11s who tried to claim a locker had their little padlocks cut off with boltcutters by people who felt they owned the locker more.
Most likely the $20 note is actually in my jacket that I wore the other day – meaning it probably never made it into my wallet in the first place.  Great going Ben!

Hasn’t his been an exciting post! HAH! Deceived!  Worst mystery story ever!

Oh yes of course! The POTATO!  Where does that come into the story?  Did I find a potato in the ground and decide to eat it raw to suffice my now tingling hunger?  Nope.

This laptop that I borrowed from the Library… unbelievable… it is the slooooooowwweesst …. agh. *Head hurts*
Quite literally one hour of my 3 hours was spent waiting for this thing to actually log in – and when I opened up the web browser the whole thing froze on me… requiring… *sarc* A VERY FAST AND HASTY REBOOT! *sarc*
I have to say, I would have been better off plugging a monitor and peripherals into a potato to get this post written – probably would have been finished in half the time…

Well until the next time, when you are gifted with a boring College-based post.

Okay, I’ve about had it.
I’m sick of everyone being way, way too over-dramatic.
Yes all you people on MySpace are the main target of this post, I
can’t believe you.

Why do you people say that your life is ruined?
Well from what I’ve read it’s because ‘people don’t like you’ or ‘your
boyfriend or girlfriend broke up with you’ or ‘you can’t get a
girlfriend.’
Gawd, you people need help.
Because your worlds revolve around relationships, around ‘Needing to
be popular’ about people ‘needing to like them.’

It’s not the end of the world!
Your life isn’t over just because someone dumps you, cos you think
no one likes you.
Half the time people do like you! But a few people aren’t enough for
you! You need everybody to like you! Life doesn’t work that way buster
so deal with it!

And as for girlfriends and boyfriends! Many of you have had 8 even 12
already! Some people haven’t had any and they are happy as can be.

The main problem here is that many of you have meaningless
relationships, only going out cos you thing you have to, heaps of
people go out for a day or a week and stop. Classic examples of
meaningless relationships.

Get a life and stop having to rely on other people for you to be happy!

Now before someone thinks, “Oooh! I’m going to like this post!” just make sure that you have read the title properly and that you haven’t mis-read it. It is Sexist TV Shows.

This whole thought started after watching two TV shows on ABC a moment ago, now I’m not saying ‘Let’s take legal action’ or any of that jargon, everyone seems to think it’s a normal fine TV show, but whenever I come across a TV show with this stuff I find it offensive.

It’s how boys and girls are always fighting over which one is the best or who is the smarter, and always ends up favouring the girls.
And no, this is not a boy throwing a tantrum, this is a boy typing up what appears to be a tantrum but is really a lot of thought pre-defined then packed into 7 odd paragraphs.
I’m not saying to make girls appear the stupid ones, nor the boys be the careless ones, because either way I find it offensive, stop picking on one another!
I’ve said it in the past, but neither one is better than the other.
And neither one is ‘dumber’ or ‘stupider’ than another, the words are quoted because kids at school always use these to express people.

No one is ‘dumber’ or ‘stupider’ or ‘smarter’ than anyone, being smart isn’t always dependant on your knowledge, but how your brain sees the world and how you cope and react in different situations. A person could know a lot, but be very lacking in the social area and may faulter under pressure, where as a person who doesn’t know that much may have a large strength in social activity and can easily go under pressure.
There is a lot to take into account before you go name calling ‘dumber’,’stupider’ or ‘smarter.’

And TV shows make boys act completely idiotic and always seem to want to ruin everything the so ‘perfect’ girl heroes of the show do, but always fail because the girls somehow have some other way to counter attack it.
Gah! It’s a mongrel nuisance! Boys aren’t so bad once you start hitting High School aye girls, nah! But no, that’s the way the train rolls down the hill.

Hmmm, I feel like Selby in a way talking about how not all dogs are drooling hairballs chasing after sticks in the backyard . . .

You get the message,

Stop picking on the different genders!

Or am I the only civilised one.

(With many minor spelling issues)

Hope you had a great Christmas, and enjoyed the turkey which you’ll now probably end up eating for breakfast, lunch and dinner for the next few weeks because of the size of them this year.
Did you see the size of some of the turkeys this year? Whoah!

The website theme has come back online again, don’t know why, but it’s back!
I dare say the host suddenly started back up again, so there.

Are we looking forwards to 2010 people?

Be back later, I have presents to play with.

As you may have noticed the theme seems to have completely vanished, there are only some parts that still remain, don’t worry it’s not your computer failing to load the page, the host that has the pictures for the theme has obviously gone offline.

I do not believe it.

That was possibly the worst Doctor Who episode that I have ever and will ever see in my entire life. It was absolutely terrible!!! How on earth did they think of making such a thing? 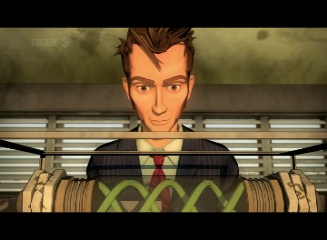 The image above is a snapshot of the Doctor Who episode called ‘Dreamland.’
It’s an animated episode of Doctor Who made by BBC, It was an absolute disgrace to the proper Doctor Who show!!! It was terrible!

It was like watching Jimmy Netron on steroids with plastic surgery.

And the animation was choppy in some parts and really, it doesn’t work. 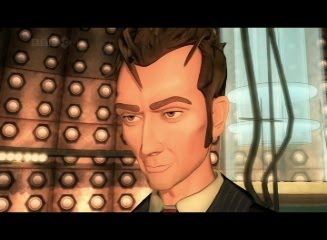 Doctor Who + Animation = Absolute Rubbish!!!
The images above may look good, heh heh heh. It’s not, once you watch the show you get the full gist of it, sometimes the voice doesn’t seem to go with the character, the voice and lips move at the same time but it just doesn’t seem right.
It takes place in America, it seems to me that doing the episode in animation is because America would never let Britan ‘mock’ America.

I cannot believe that I watched it, I’m pretty let down now.
The voice of the Doctor is David Tennant’s but the animation, the show just doesn’t work unless it’s the real David on set.

I rate it a -2/10, Yes I’ve gone minus!
If this was an audio tape or a radio thing I may rate it higher because the sound is as good as it gets.

On the bright side BBC released their new 2010 Doctor Who Logo:

For more on the logo and insignia CLICK HERE>