I’ve been using this recently, and I love it!
It is simply outstanding.

For those that don’t know about computers much, let me explain. One of the most common operating systems is Windows XP, you may very well be using it at this very moment. It’s the one with the button in the corner saying ‘Start.’

Then there is the Mac OSX, which is legally only allowed to run on a Mac computer. But I stuck it here as another example of an operating system.

What VirtualBox does is lets you run Multiple operating systems on your computer. 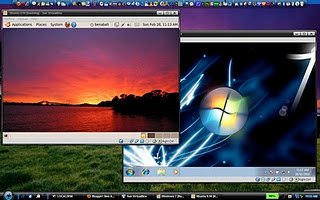 To your right is a picture of my themed Windows XP desktop with Windows 7 and Ubuntu 9.10 running on my computer.

Why would you want to do this?

Firstly it makes your computer very compatible, you can run Linux programs, new Windows 7 only programs like the new Movie Maker.

Secondly if you are thinking of upgrading or changing your computer’s operating system you can test it before installing it fully.

For those that have no idea about operating systems, and barely can use what they have, don’t bother with VirtualBox, it’s really only for people that know how to use computers . . .

It’s recommended that you have at least 2GB of RAM (Random Access Memory) to use this.