For the finale episode of NeWs!, a comedic school news show displayed in a few of the assemblies in 2011, we had an epic action scene in the style of a console game beat-em-up. We actually started this probably 4-5 weeks before we actually started preparing the final episode of NeWs!, and it’s just as well too, because the amount of time that went into this video was more than a thousand sponges could even dream of soaking up, well if somehow, some nuclear experiment went wrong and gave sponges the ability to soak up time itself…

Nonetheless, this improvised video took shape the more we filmed it. The brilliant action/comedic mastermind of Ollie was the true inspiration for the video, as we filmed he would include extra ideas, “Yeah I so Alex you can like run at him, and he’ll step back and then you have to stagger towards him okay?” When we all had all seen the foam head in the drama room, Ollie instantly knew we could use it as part of a violent effect. So working it all out on the move, I decided whether or not the effects were possible or not, and then figured out a way we could do them. Alex and Alex, our fighting aliases, recorded a series of grunts, groans and Aaaahhgghs for the “game”, I guess the fact that these sounds repeated throughout the video really helped it feel like a video game, although . . . didn’t really at all. Now just to give you an idea of how much this video was mashed with effects and colour, look at the above photo!

Every single scene of video had to be individually motion tracked, then the sky would be replaced, the video would then be “cartoonised” slightly, followed by multiple harsh colour correction layers, a few little textures were added along with the HUD, which was made in photoshop, AND finally in a few parts of the video, a dragon was also added flying in the sky. Not many people noticed the dragon… oh well, but it still helped add some atmosphere to the video.

Surprisingly the beginning bit with the menu was made before the rest of the video, my reason for doing so is because that was the fun part. Some other things that were added into the video, although it probably wasn’t worth adding them in, was a few castles at the beginning. In the video world this method of adding things into the background is called set extension, but it’s also known as matte painting. It’s where you merge a photo or video into one to make a new structure, landscape, etc. This method is used A LOT in shows like Merlin, Terra Nova, Doctor Who . . . But particularly Merlin.

The images I used for this are in Public Domain, this means they are Royalty Free, or in more simpler terms, I can use them for anything I want, commercial or otherwise, without having to worry about people suing my arse into a thousand pieces. Because I quite like my arse in one piece.

Normally if you’re getting Royalty Free images it will cost you, thankfully I found this great site: http://www.public-domain-image.com/ which has a wide variety of photos, free for use in anything. There’s also another large collection of stock photos at PacHD.com “Ben, what about the awesome throwing effects?”

I noticed that everyone started cheering when Ollie tossed the first Kortal Mombat fighter into the air, so they evident ally thought it looked cool. So the question is, how did Ollie throw Alex that far into the sky?

Well it turns out, we didn’t throw nobody. The benefit of this kind of effect, is that it’s over pretty quickly, plus, because of the fast movement you can use a lot of blurring to hide your video editing tricks. As you can see in the image above, the shadow of Alex looks considerably dodgy, but because this shadow is only visible for about a second, it doesn’t really matter that much. All eyes are being drawn to the guy getting picked up. But that again is another trick.

I used a still frame of Alex lying down with his leg up and key framed (edited frame-by-frame in the video) the picture so that it followed Ollie’s clenched hands as he pretended to throw someone. Speed the action up enough, and hey presto! In fact, every punch, kick and swing in this video were sped up to make them look more violent, a technique also used in many action videos, a technique which I picked up by watching Freddiew‘s YouTube video “Whose gun is it anyway?” I bet you feel ripped off now! When Ollie ended the video with a dramatic head-kicking, it turns out that it was all a big rouse. As you can see in the image above, it’s that foam head I mentioned earlier in the post. Okay, so Ollie kicked a foam head instead of Alex’s REAL head, but what about his body? It’s clearly visible behind the head . . . and it is missing a head!

I’ll tell you now that we didn’t get a life-size replica of Alex and lay it on the ground with the fake head. We did something a lot more computery. (I make up words, get use to it.) 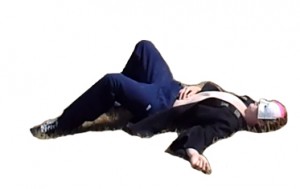 I got Alex to lay on the ground for a little bit so that I could get a single frame of JUST him. Then we got him out of the shot, making sure that the foam head was placed EXACTLY where his head was, (Though as it turns out, that didn’t really need to happen.) then Ollie kicked the foam head out of shot.

The still frame above of Alex lying there was motion tracked ONTO the grass, then with a little bit of rotoscoping and editing the effect of his head being kicked off was produced. Thankfully it was another one of those fast startling effects that allows you to be a little bit sloppy, you’ll notice in the image of the foam head the masking I did to add the still image of Alex in wasn’t perfect, because it didn’t need to be.

Well, hope you enjoyed this VIDLOG, another little insight into how much I really need to get a life.

I find it interesting that I wrote this VidLog on the 29th of December, when the first VidLog I wrote on the 29th of November… oh drat, actually not anymore, because it’s just gone 12:05 AM . . . that just screwed up my endnote. Anyways until the next VIDLOG…

For the past few weeks I’ve been working on a lyric music video for a band called Feeding Conor. During last year I designed many of the graphics for their Facebook page, their band page, and the…