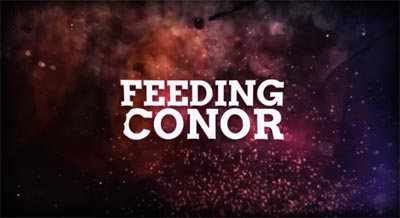 For the past few weeks I’ve been working on a lyric music video for a band called Feeding Conor. During last year I designed many of the graphics for their Facebook page, their band page, and the album cover for Da Da Da.  But now it was time to create something that would really make people go “Wow.”

I had actually started this project awhile ago, but I made the mistake of trying to make the entire thing in After Effects. It was incredibly time-consuming, the lyrics were practically impossible to align with the music and I used some effects that just ended up in really blurry, unprofessional looking, results. I had about 5 lines of the song laid out in After Effects, and it had taken forever to get that far. Unimpressed with the progress of the project I decided to start from scratch with a new approach. I’d learnt my mistake, After Effects was simply no good for timing out the lyrics, and I’d wasted a considerable amount of time figuring that out.

The first step in this process was to get all the timing for the words, this was the most boring part of the production, as I had to slowly scrub through the song bit by bit and manually time out the entire song word-by-word, slow, but faster than the way I was doing it before. I did the timing in Adobe Premiere as it was far easier to listen to the audio while I was moving things around, and that’s something that After Effects doesn’t do very well.

Next I imported the data into After Effects and started to structure the scene word-by-word (again), moving the fonts around etc. Once I’d finished all the lines of the song it was time to start designing the atmosphere. At first I had planned on having a bland grey and white gradient background with a little texture around the edges. I decided to fiddle around with the look a bit, I made the gradient dark, and added a basic fractal noise generator in the background as well.

After a bit of thinking I just made it 3D. In After Effects I added a (virtual) camera, set up the words in a 3D room, added a particle system followed by a 3D lens flare and some more minor particles faintly distinguishable in the background. At the beginning, some old footage I filmed of an electric guitar was also included… probably didn’t need to bother with that, but anyhow.

I rendered out two versions to start with, it took 1 and a half hours to render because of all the camera rotation and massive amount of particles, the first version was basically the final product, just minus a few extra animations. The second version was the same, except it had a constant flow of particles towards the right hand side of the video, the whole way through.

I rendered out a third, which removed the flowing particles and in turn gave more emphasis on the actual text, which was the objective of the video in the first place… Tis’ a lyric video after all. I also added a little bit of colour correction, added “Da Da Da” underneath the Feeding Conor logo at the start and tweaked some of the words a bit as I thought they needed adjusting.

FINALLY, I did a fourth render, I used the video from the third render, added the spacey images of the band members at the end along with a lightning effect and the final promotion stuff. The other thing to note about the fourth and final render is that I actually mixed it with the second render, which had the flowing stream of particles. I thought that the flowing stream of particles made the end part of the video look a lot more electrifying and bright . . . so meh.

You can watch the final video here:

Be sure to check out Feeding Conor’s Facebook page if you haven’t already.

Thanks for reading, I’m off to watch Leverage. (One of the best shows in the entire world)

For the finale episode of NeWs!, a comedic school news show displayed in a few of the assemblies in 2011, we had an epic action scene in the style of a console game beat-em-up. We…