(Note: There are some fictional pieces tied in with this episode. All images are from the web.) Welcome to the BGTN episode that was thought up by the winner of the BGTN Competion.

On Today’s Show BGTN Picks on America, We have a Ben Cam, A Think About It, And a Ben’s Rage.

Top Story Now I’m Picking On America, and who else to pick on in America but the American idiot himself, George Bush.
Now George Bush has done many stupid things in his time in politics. (Obviously he can’t now.) These involve pulling funny faces on national television.
And putting his rude finger up at national television . . .
Now all these stupid things he has done made me decide to stick all these stupid things into a stupid, George Bush Stupid things section. Here We Go. The first stupid thing is trying to look through a pair of binoculars with the lense cap on.
The second stupid thing is sticking his rude finger up at reporters.
The third stupid thing is eating a cat, well, trying to . . .
The forth stupid thing is being hated by his birthplace . . .
(This may be fact or fiction) And the fifth stupid thing is pulling funny faces that resemble . . .
Monkeys!
Also he spelt the word Potatoe with an ‘E’ on the end, He says stuff at the wrong times and sometimes he starts talking about stuff that they weren’t even talking about in the first place! Now what makes me wonder is now that Obama has won the election Bush is touring him around the Whitehouse.
It makes me wonder what George would say . . . “. . . and this here is my office!” “What are you talking about! This is that bathroom!” “Oh really? Well that’s good because I’ve been holdin’ somthin’ in for ages! HMMMMPH!”
Also take a look at this George Bush looks completely freaked out by the camera man.
“What in the world is that!” “It’s a camera you nong!” Here is an interview with George Bush, Now I don’t know about you but I have no idea what Mr Bush is on about . . .

Ben Cam Again, I’ll see what i can do.

Ben’s Warning! Be very, very carful with stanley knifes as when I was working on my house design project I slipped and cut something off. 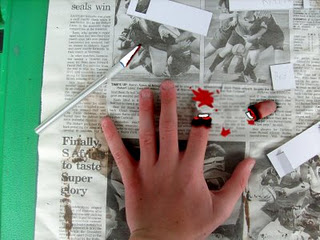 Thankyou this has been a Ben’s Warning.

Ben’s Rage I have to complain about something else! This time it’s the stupid cords on your pants! If you are a weedy phello like me if you don’t do up the cords you’ll be walking into school with your pants arround you ancles and when you forget you have to stand somewhere in the room and tie them up without anyone noticing. I mean why do they stick them there! Hasn’t anyone heard of elastic!

Next Time On BGTN

The scandal that is striking the nation, black market fakes of original iPods, Phones etc!

That’s all for today’s show!
The next BGTN will be a new series . . .
Contact me: [email protected]
Thanks,
Ben.