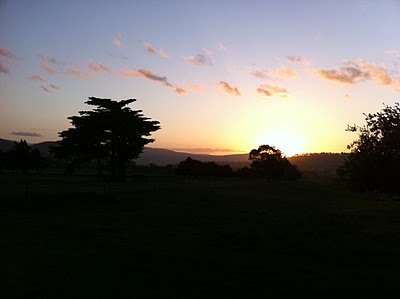 Taking a picture of a sunset can be frustrating, the picture never looks how the real sunset does, it’s just inevitable.


Because part of the sunsets appearance is the atmosphere around you, not just what you see.


There are cameras these days that offer ‘Sunset Modes’ and different lighting modes for taking pictures of the sun as it hides behind the horizon, this picture to the left however I took with a standard 5 Mega Pixel HDR Camera.


In my mind, with a sunset picture, even though you don’t get what you see, you get a nice effect that still looks good, even though it is less than half as good as its predecessor.


Sunset pictures, I find, can bring an interesting effect when taken so that the landscape and trees are silhouette, or black.
Almost like the image above, except you can see the grass, if the grass were darker and not that light, the silhouette effect would definitely be at play.

I took a few pictures to demonstrate the effectiveness lighting, of the angle, and where you take the photo.


All these sunset pictures, including the first one, were all taken within a few minutes of each other, on the same day.


To the right we see a picture which is angled slightly so that the landscape is diagonal, the picture is also slightly blurry due to the light reflecting across the camera and interfering with the capture. The picture doesn’t look very good, does it?

The picture to the left is from behind some trees, as you can see the picture is good, but the colour of the sunset cannot be seen very well, it’s not absorbed very well, although the silhouette on the tree branches is a nice effect.


Now may also be the time for me to tell you that none of these pictures have received special treatment, meaning no photo shop or any touch ups, these are straight from the camera.
We have 3 photos,
– The first was taken in an area with a shadow over it, with the horizon in the centre of the picture, sky across the top half of the picture, land across the bottom half, and the sun in the middle a little bit to the right.
– The second picture was taken on an angle with the sun and the sunlight coming from the right of the picture.
– And the last picture was taken behind a tree, with the sun being behind the tree, but other than that the sky in the top half of the picture, and the land on the bottom half. The other thing to note when taking sunset pictures, is that the picture WILL vary depending on:


-When you take the photo, if you take it near the end of the sunset, when the sun is barely in sight you’ll probably get a silhouette effect.


– Conditions, as you can see the photo to the left was taken with clouds in the sky, giving the clouds a light up colourful ’ember’ to them.


-General, in general every sunset is going to be different, they are often individual in terms of their appearance.


Well hope you read the different pointers and info listed in this post, the most important thing, is for you to look at the photos, and decide on what YOU think looks good, so wait until the next sunset, run outside and go snapping pictures, take more than you need to, try different effects and go through them and see what you think.


P.S. If you wish to use any of the photos in this post, please, please leave a note saying that they came from this blog, I’ve supplied this stuff with courtesy, please show courtesy in return.