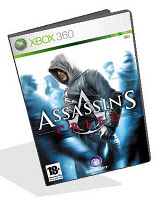 About:
Assassin’s Creed is a game of memory, No this ain’t no flash cards to memorize, literally the game is set in memory . . .
You play as Altair, a professional assassin whose job it is to assassinate selected targets. Now the reason I said the game is all set in memory is because the main character is really strapped to a machine and is living the life of his ancestors through biological memory, its an interesting story, but they’ll fill you in on that part when the game begins.

Review:
Personally this game gets really long and repetitive, a lot of the things you do once, you’ll end up doing again, these tasks like pickpocketing, punching a particular person to get information, all these things are on repeat.
The game doesn’t keep you bored for long though, because it slowly gets harder and harder to evade guards, to assassinate targets and to pickpocket and do repetitive tasks.
The land in the game is large, the graphics are detailed, however, If I have to climb one more stinking tower to get a flippin’ map I’m going to lose it.

Summary:
The graphics and physics of this game are just stunning, running along rooftops and climbing up walls has never been so visually beautiful. The game play does let it down, tending to get boring and repetitive after you find yourself doing the same things over and over, but it really doesn’t ruin the game that much.